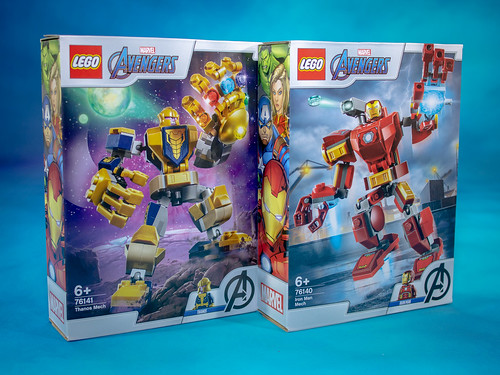 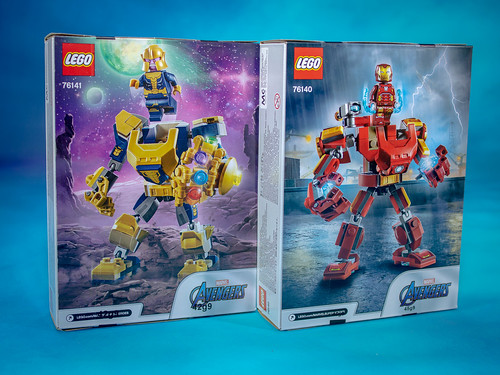 Hidden within the confine of each boxes are a trio sachets of LEGO pieces, along with a single sheet of sticker as well as a booklet of assembly instruction.

Let us first gaze upon the crimson armour that belongs to our favourite Marvel hero, Iron Man. 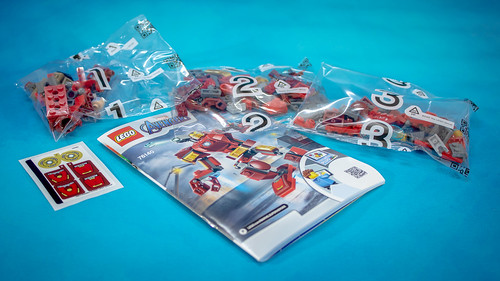 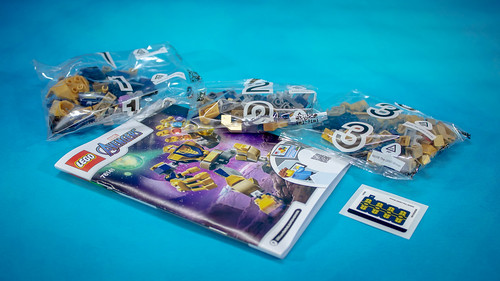 About 20 or so minutes of brick-by-brick assembly is all it takes to complete this marvelous piece of fully articulated mech.

Clad in this gigantic outer armour that fully envelopes the Iron Man mini-fig himself, the mech suit sports its signature red overall as well as an array of flat gold detailing, amongst other minor touches that represents its mechanical structure. 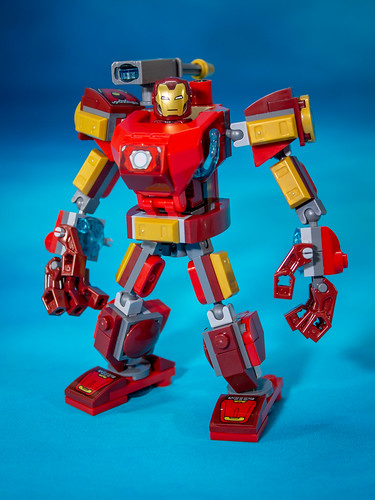 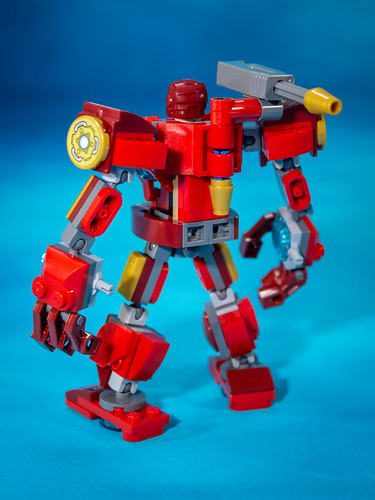 True to its name’s sake, the chest cavity of the Mech Suit houses our Iron Man mini-fig himself, and can be opened for easy retrieval of the said mini-fig. 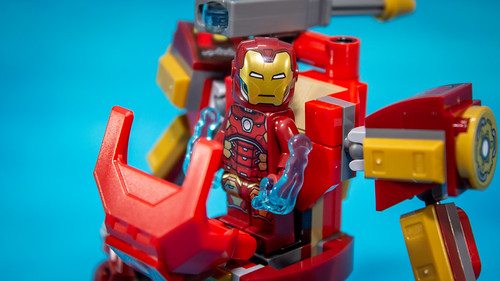 The Iron Man mini-fig is finely decorated with printed details, each of his hands holding a clear blue effect part, For some reason, his helmet is not of the usual type seen in other Marvel sets where his mask can be flipped open to reveal his face. Instead, it’s the bucket type that completely covers his head, similar to that of a LEGO Star Wars’s Stormtrooper.

Underneath the helmet is Tony Stark himself, one side of the head is the simple generic expression face while the rear side is that of his face covered with holographic head-up display.

With its clear blue Arc Repulsors on both its hands and feet as well as the Arc Reactor stickers/printed details on its shoulders and chest, the Mech can easily move around striking your favourite poses from the movies with its multiple ball-jointed articulated points. 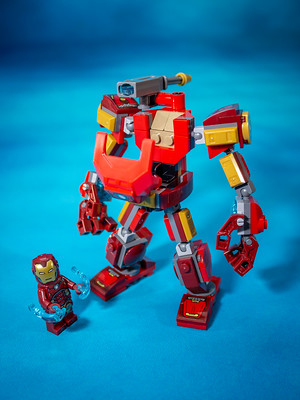 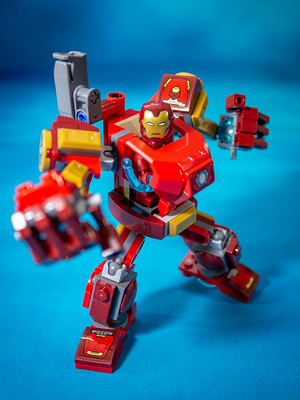 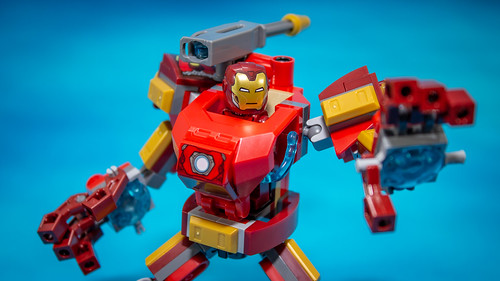 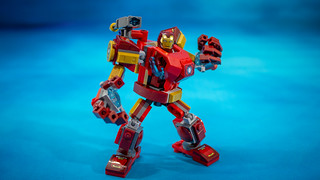 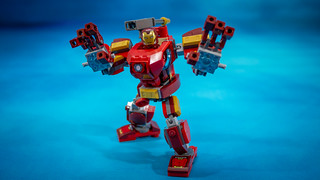 Adding to the play feature, this mech is equipped with a stud launcher just above its right shoulder, where you can load a total of 3 clear blue round studs within and launched from it via a trigger piece located just behind the launcher itself.

Aesthetic wise, while it is an eye sore to see that trigger mechanism so visible to naked eyes, you can just leave the trigger piece and use just the launcher piece itself.

Or, you can just flip the launcher to the left side of the shoulder instead and pretend it’s a separate cannon weapon. Ah, the versatility of LEGO and your own creative mind… www 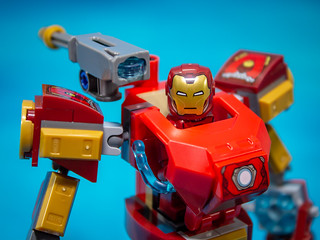 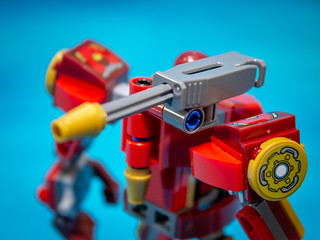 A pity the limitation to the articulation kind of hinder it from doing the perfect landing pose, not mentioning the inability to tilt the mini-fig’s head upwards to face the camera. :P 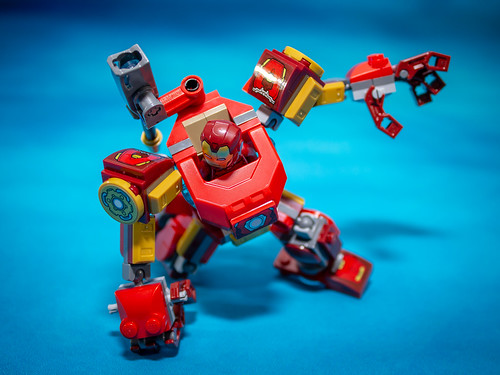 Now, time to move on to Iron Man’s nemesis, the Mad Titan Thoanos himself.

Similar to Iron Man Mech, Thanos Mech took me a little bit over 20 minutes to finish, the whole process and structure basically identical to that of the former.

In contrast to that of Iron Man’s crimson overalls, Thanos wears a navy blue base colour filled with lots of flat gold and grey decorations, in parallel to his colour scheme in the comics/movies. 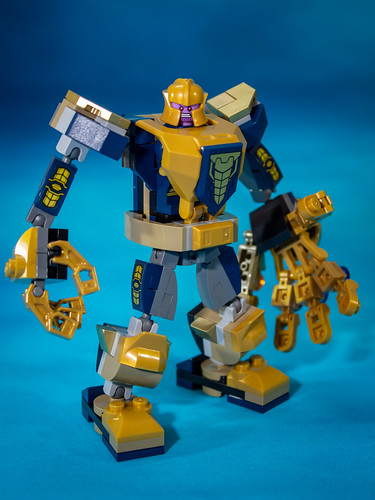 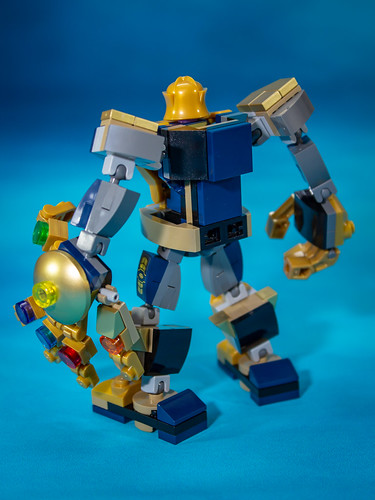 The mech’s chest cavity can be opened just like Iron Man’s, with Thanos mini-fig himself within the cockpit ready to jump out for some intimate action. 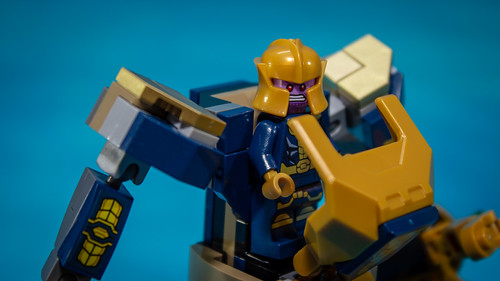 Instead of using the larger Hulk type body as seen with other sets, Thanos here is represented with a standard mini-fig, clad with accurate printed details and wears a flat gold helmet.

Underneath that helmet is Thanos’s recognisable purple-skinned head with an angry face. There is no alternate expression on the rear end of the head, unfortunately. 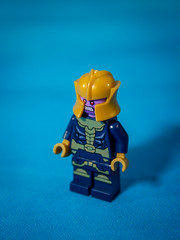 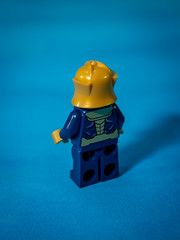 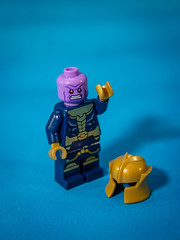 Perhaps the most significant visual difference between the two Mechs, other than the minor build details and colour scheme, is the Infinity Gauntlet on the mech’s left hand. It even comes complete with all six Infinity Stones, represented with six different coloured clear round studs. LEGO is even kind enough to include another set of the Infinity Stones as spares in the box!

The only downside to the Gauntlet’s build is that you cannot do the Thanos Snap due to the angle of articulation on the fingers. What a pity… 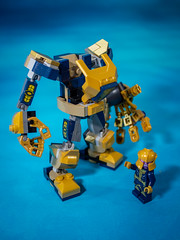 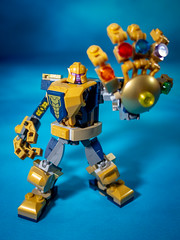 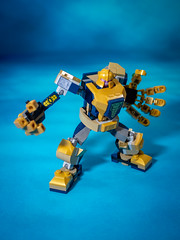 Both mechs going mano a mano against one another! However, we all know what the outcome is…

Dread it, run from it, destiny arrives all the same. He is inevitable… 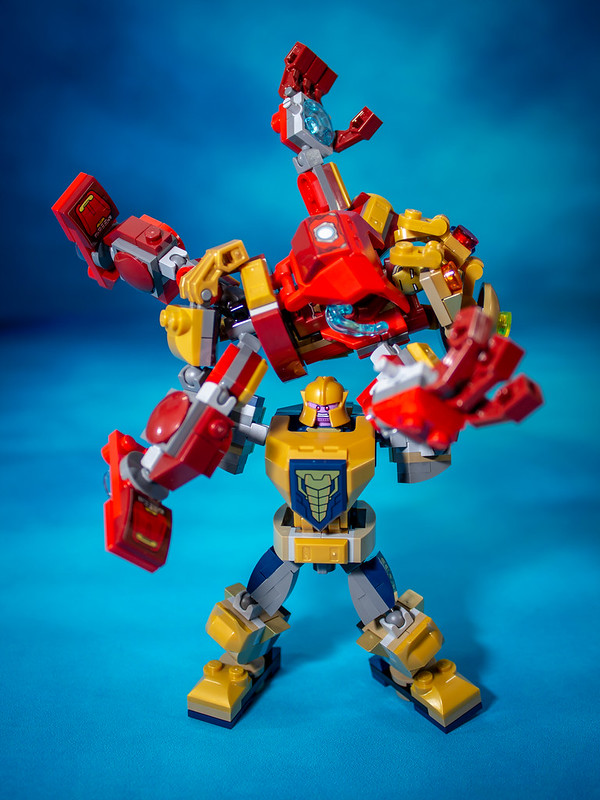 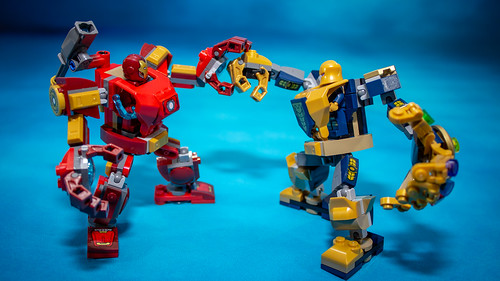 Part of the Journey is the end.

In conclusion after fiddling with these LEGO sets, Thanos Mech is perhaps my favourite between the two sets, thanks to the inclusion of the Infinity Gauntlet which added a lot of play factor.

But Iron Man Mech is hard to part with too, I mean he IS Iron Man after all, all time fan favourite, which I am one of them.

Perfectly balanced, as all things should be.

This site uses Akismet to reduce spam. Learn how your comment data is processed.